Last week independent writer and all round multi-faceted personality Woon Tai Ho interviewed fahcheong for the Peak.  Tai Ho came by the workspace in the afternoon, and sat among the wood and stone pieces that will form the basis for the upcoming exhibition.  It was very interesting for all involved, especially when the photographer and art director came by to take photos of the artist.  We made them do double work by telling them to move some artworks around.  As well, I have never heard fahcheong referred to as a “doyen of public art” before.

Main topics of discussion were fahcheong’s public art, his motivations for producing such works, his ideas on public art, and the artist’s artistic process in general.  It’s very telling that Tai Ho thought the artist only worked in bronze, when in actual fact this medium is comparatively recent compared to say, wood and marble.  “Temusek”, a marble sculpture which was purchased by SMRT and installed at the old Somerset MRT Station (it’s now somewhere in Bishan) was actually fahcheong’s first sculpture commission.  “First Generation”, the bronze of 5 boys jumping into the Singapore River, is the public sculpture fahcheong is most well known for. 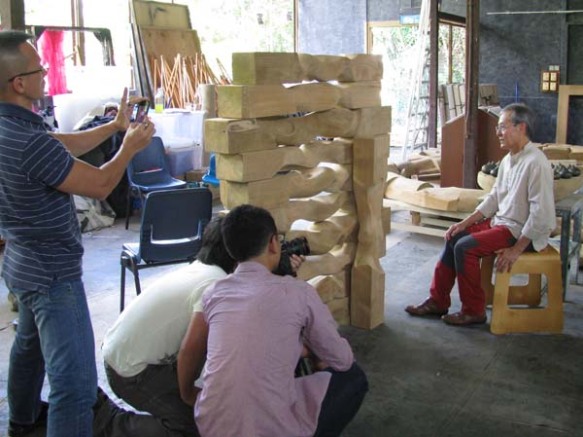 The interview went quite well, and Tai Ho remarked that fahcheong was unlike any artist he’d previously interviewed, in terms of how he viewed his creations.  Other artists, he told us, seem to want to have their works displayed in pristine galleries, away from wandering hands, elevated to some higher status.  Fahcheong is adamant that his public works anyway, be for the public and of the public.  It is no use creating a piece of work which is in a public space and most likely paid for by the public’s tax dollars, to be completely untouchable and unapproachable.  It must mean something to those viewing it, and become a part of their lives as a result of it.

Some interesting quotes and ideas from the interview:

“People read agendas and meanings of their own into public art pieces.”

“Unless you want to be stone dead, you have to move.”

“Public art should have continuity and be part of place and history; become the stories that endure.”

October sees fahcheong back in Singapore and working on putting the finishing touches on pieces for his upcoming exhibition!  “Passages” is a long-awaited solo exhibition after a hiatus of over a decade, and will feature many new and powerful works as well as older works from the artist’s personal collection.

We’re all excited over the rather unconventional venue – fahcheong’s work studio, complete with wood chips on the floor and works in progress – and looking forward to the many varied reactions that we’re sure to receive.  The exhibition will be open to the public from November 18 – 26, 2011 at Emily Hill.

Works in wood, bronze and stone will be presented, revealing fahcheong’s personal development of ideas, and the maturation of both his concepts and his methodology.

Stay tuned for further details and the official invite!